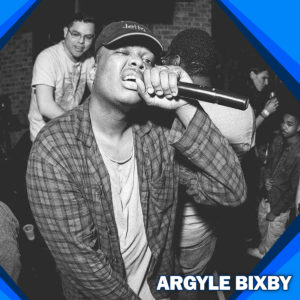 It takes a keen eye to see Miami’s bleak undertones; for 24-year-old Glenn Bryant, they were part of daily life. “I grew up around constant contradiction here in Miami,” says the emcee known on stage as Argyle Bixby. “There’s a side of Miami that’s completely a façade, and there’s a side of Miami that goes deeper than the makeup. That’s what I want everybody else to see – the duality of both.”

On his first EP, Bryant paints a stark portrait of Miami that’s much darker than the sun and beaches most associate it with. “Under the Influence of Addicts, [is] basically my take on my city and what it is to be an artist in Miami,” he says. “I come at it from very different aspects because I’ve experienced so many different aspects in my short 24 years.”

The burgeoning wordsmith got his start around age 14 when he realized he had a gift of freestyling. “I used to be at the lunch table rapping about corn,” says the emcee. “It definitely trained me to be able to hold my own, to be able to just come up with it right then and there and to find rhythm from silence.” Now, with the lyrical candor of J. Cole and a similar cadence to Kendrick Lamar, Bryant has cultivated a local name for himself with a charismatic presence both on and off stage.

A staple in the Miami hip-hop scene, he has performed at multiple venues around the city including Eve, Villa 221, Churchill’s and Vagabond. He has also opened for Gunplay, Blu, Emalkay and Riff Raff. This year he attended UKF 2014 at The Clevelander on South Beach where he hosted the Basshead Rooftop Pool Party alongside Sopheye Sofly and emcee’d for New Zealand DJ duo TRUTH. Last summer he headlined the South Florida Hip-Hop Festival with local artists Illangelo, Dre Starr and Jakeem HD.